We were able to turn the weight loss around this week with a loss of eight pounds, as opposed to the .8 pound gained last week. Great job, everyone! The biggest loser this week was K.C., who lost five pounds - WOW! Incredible work, K.C. K.C. will be attending an Army National Guard Sgt.'s course in a couple months, so he's on a mission to get fit and ready for the course. That's one great thing about the military - you are forced to stay in shape. Granted, there are some slobby troops in the military, but for the most part physical fitness is emphasized as a critical component of a successful career. You gotta be fit to fight!

On another note, last week I ran the Nike Half Marathon in San Francisco. It was so gorgeous that I became a bit teary-eyed. Yeah, I was running up steep hills at the same time, but the pain was worth the ambiance and beautiful views. I beat my half marathon time from last year by almost 20 minutes so I was pleased. I've been bit by the running bug (even though I'm slow as heck), and James and I are going to sign up for a Spring marathon - probably the Santa Cruz Half Marathon. I definitely recommend these races as a way to kick start a work out program, even if you aren't a gifted runner.
Posted by Debow Family at 8:36 AM 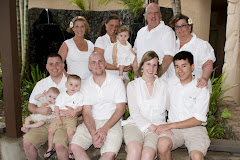